Environmental Initiative of the Year 2014 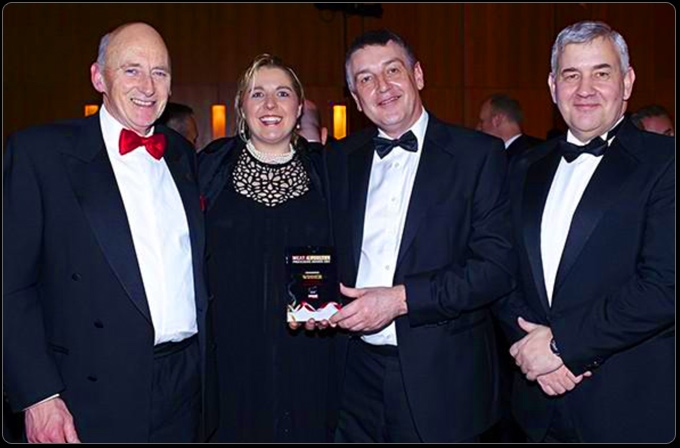 In late 2013, we at Cranswick decided that we would submit an entry for consideration to the Meat & Poultry Processing Awards for the ‘Environmental Initiative of the Year’ to be held in Manchester on 19 Feb 2014.

We based our entry on our “Green Thinking” strategy which addresses our environmental impact and our recognition that our Retail customers, financial investors and other key stakeholders have a growing interest in how we operate our business.

In order to deliver sustainability in practice, Cranswick established an Environmental Project Management Team tasked with assessing the Group’s performance, identifying and sharing best practice and formulating performance measures based on the benchmark year of 2007. Working across the five themes of water, waste, energy, packaging and carbon footprint, the Group has made significant progress towards reducing its environmental impact.

The Green Thinking steering team meets on a quarterly basis to discuss progress and identify progress against the ambitious targets: http://www.cranswick.plc.uk/greenthinking/greenthinking_index.html

Perhaps one of the largest elements of the programme has been addressing waste. The food industry is a significant contributor of industrial and commercial waste – some 10 per cent of the UK total. The Group is aiming to reduce the amount of waste generated by reducing inputs, recycling where possible and minimising the amount of waste that goes to landfill.

Working in close partnership with waste and recycling experts Biffa IRM since 2012, Cranswick has experienced a resource revolution. Across all of its sites the amount of waste produced, and the costs for disposal, have been dramatically cut.
To investigate the causes of waste, the Cranswick team has worked back through the Group’s supply chain to explore alternative products and ultimately eliminate waste from its processes. Solutions at the top of the waste hierarchy are always preferable as they save money and importantly preserve raw materials, significantly reducing the environmental impact of standard operations.

Achieving zero waste to landfill is a theme that now cuts across all of Cranswick’s operations. Working in close partnership with Biffa IRM, all recyclable materials are now removed from the waste stream and sent to re-processors. This not only increases the amount of recycled material available for the UK manufacturing sector, but also significantly reduces our reliance on disposal methods such as landfill.

Since IRM’s involvement began in April 2012, Cranswick has made astonishing progress. Diversion of waste from landfill has increased ten-fold (previously, 70 per cent of waste was sent to landfill – today, that number is only 7 per cent) with a staggering 93 per cent of the Group’s waste now landfill avoided.

Over the last 12 months, Cranswick has diverted nearly 6,000 tonnes of waste from landfill, with 11 of the Group’s 13 sites now proudly achieving zero waste to landfill (Zero2 Landfill).
As a result of the clear environmental improvements that Cranswick has made, the Group has significantly reduced its waste management costs. Across the group, a number of waste-related initiatives have successfully returned over £118,000 in rebates from landfill diversion. The company is growing – production volumes have increased by over 40 per cent in recent years. And yet the unit cost for managing waste resources has reduced significantly.

Cranswick has been managing its carbon footprint since 2007 and initially set an environmental target of reducing this by 20% by 2010, in fact through effect energy management and investment in energy efficient technologies the company out-performed this target and actually reduced its relative carbon footprint by 23%. Spurred on by this success we have set a new more ambitious target of a 30% reduction by 2020, the early signs are good with the relative carbon footprint already 14% less than that recorded in 2010, and over the same time period the company’s absolute carbon footprint has reduced by 7%, all achieved against a background of increased production, a clear sign that we are effectively managing our energy usage.

As a result of all our efforts we were very pleased to be announced winners of the Meat & Poultry Processing Awards “Environmental Initiative of the Year” 2014.