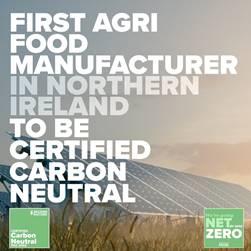 We’re delighted to announce that the team at Cranswick Country Foods Ballymena are the first agri food manufacturer in Northern Ireland to be awarded Carbon Neutral specification PAS 2060.

This key milestone in their journey to Net Zero means the site has reduced carbon emissions as much as possible, has an approved emission reduction plan and has invested in verified offsets to reach carbon neutrality. To help deliver this, the team has invested in CPD certified training to further their climate knowledge.

From a baseline year of 2018, the team has undertaken a raft of projects to cut emissions despite production increasing by 12%:

· heat recovery systems are now in place in the factory to reuse excess and waste less heat.

The site now has an approved emission reduction plan to reduce further the 3267 tonnes of carbon emissions still being produced. In the meantime, the team is investing in projects that will remove and reduce the equivalent amount of carbon from the atmosphere. These carbon offsets take the sites carbon footprint to zero, and the projects been strategically chosen because they provide benefits such as increased biodiversity, improved local air quality, education, jobs, food security and heath & well-being in developing countries.

Ballymena has invested in high quality offsets, all of which are registered and validated by the two largest carbon bodies: Verra and Gold Standard .

These projects were chosen by the site teams to go above and beyond climate change by being aligned to specific UN Sustainable Development Goals (SDGs).

The two chosen projects for both sites are:

India’s domestic sector is one of its largest primary energy consumers with 75% of energy requirements met by fuel-wood and agricultural waste. Cooking alone is responsible for 90% of household energy consumption. Approximately 400,000 women and children die every year in India due to exposure to smoke from household use of solid fuels.

The Breathing Space Programme distributes cleaner and greener cooking stoves to households. By replacing traditional stoves it contributes towards solving the indoor air pollution problem as well as reducing Greenhouse Gas (GHG) emissions. It reduces pressure on local forests as higher efficiency means less fuel wood is required. Each cookstove will reduce approximately 5 tonnes of CO2e over its useful life.

This project will offset 561 tonnes of carbon.

This project is working to prevent unplanned deforestation in native forests, which has occurred due to logging, squatting and attempts to implement pastures. The project is expected to avoid over 22 million tonnes of carbon dioxide equivalent greenhouse gas emissions over a 40 year period. This will be achieved by managing the land in the form of a "private conservation reserve", through rigorous monitoring and enforcement.

The project is in an area of extreme importance for biodiversity conservation. The Pará REDD project zone also holds in numerous species of animals, including mammals, birds, reptiles, amphibians and fish including those considered endangered and vulnerable.

This project will offset 2706 tonnes of carbon.

With CPD Net Zero accredited colleagues, the team is ready to activate an approved emission reduction path, which is a fundamental part of the PAS 2060 specification and commitment to the Net Zero by 2040 goal. The plan includes:

· The oil generator on site is being phased out by improving the electricity grid connectivity to site. This will enable future renewable opportunities

· Using biogas as a fuel source for the on site generator

· Investing in the local supply chain through reforestation and peatland restoration

· Engaging local partnerships and farmers to work together to reduce carbon in Northern Ireland.